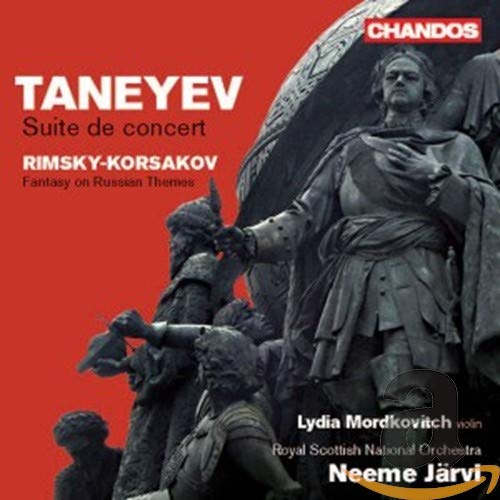 Rimsky-Korsakov's Fantasy on Russian Themes is less well known than the work it led to. Pleased with the popular response to the piece, the composer set about doing another on Spanish themes, showing off the entire orchestra's capabilities instead of simply a violin soloist. The result was the Capriccio espagnol, and it has overshadowed its older sibling ever since its creation. But the Russian folk-flavored Fantasy has its own pleasures to offer, including a refined orchestral palette, strong part-writing, attractive themes, and a subtler structure than this kind of occasional music usually displays. It really deserves more play than it receives.
These are good, stylish performances, with JÃÂ¤rvi at his most focused, and Mordkovitch offering a mix of elegance and edge. I personally prefer the bigger tone and richer drama that David Oistrakh mines in the Suite, especially when accompanied by Kurt Sanderling (Brilliant Classics 92609), though Nicolai Malko's faster tempos may be to some tastes (EMI Classics 14712). All three are in any case superior to the drearily bland affair on Ondine 959 that features Pekka Kuusisto with Ashkenazy leading the Helsinki Philharmonic. As for the Fantasy, the only real competition comes from Nathan Milstein on EMI Classics 64830--and that is real competition. But it's part of a relatively expensive six-CD set in analog sound, and I'm not impressed with either the conducting or the orchestra.
A composer of very Russian inspiration, Taneyev all his life was dogged by claims that his music sounded German, because many of his contemporaries bought into the nationalist myth that all musical learning was, in fact, German. He was even referred to as the "Russian Brahms," despite heartily loathing the Hamburg-born composer's music and methods. It was Taneyev's formidable knowledge of counterpoint (exemplified by his textbook, Invertible Counterpoint in Strict Style) coupled with his Beethoven-like reliance upon finding every conceivable variant of his themes before writing a work that led to this erroneous conclusion.
But when Taneyev sought inspiration from abroad, he turned, like so many of his compatriots, to France. The Suite de concert is as much an example of this as Glazunov's Violin Concerto and Tchaikovsky's Swan Lake. It recalls not only the entertaining mix in the Piano Concerto No. 2 of Saint-SaÃÂ«ns that one wag referred to as beginning in Bach and ending with Offenbach, but to the more profound embodiment of similar embracing contrasts in the music of Franck. The surface of the Suite is amiable and suave, with an emphasis on tone that is not especially surprising, given its dedicatee, Leopold Auer. But Taneyev plays as creatively with form as he ever did; and the piece never goes where it's expected, as ever is the case in his best work.
The stereo engineering is top-notch, clear and transparent, with good presence. The liner notes are competent. In short, I think JÃÂ¤rvi and Mordkovitch provide the best versions of both works in modern sound, and give the archival material a run for the money. Not that I'm about to ditch my copies of Oistrakh or Milstein, you understand. -- "i" Fanfare Archive, Barry Brenesal, May/June 2009

Brompton School is celebrating its 25th anniversary this year! October 6th marked the 25th day of school, so...
Read More

NOW HIRING: Kenosha Unified is looking for individuals to join our team as substitute teachers. This role...
Read More